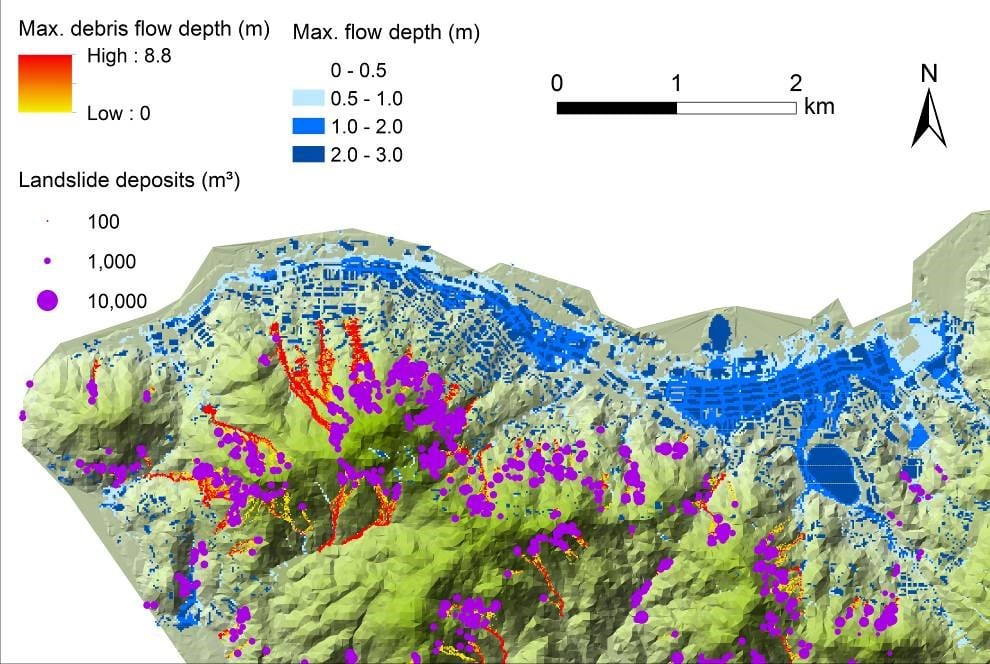 Under a changing climate, the intensity and frequency of rainstorms have increased. Rainfall is the primary trigger of Hydrogeological hazard in the Guangdong-Hong Kong-Macao Greater Bay Area; hence rainstorm spatial distribution is an important piece of information in hazard analysis. The spatial correlation characteristics of three landslide-triggering large storms in Hong Kong have been selected and quantified. The spatial maximum rolling rainfall can be represented by a rotated ellipsoid trend surface and a random field of residuals. The maximum rolling 4-h, 12-h, 24-h and 36-h rainfall amounts of these storms are assessed via surface trend fitting, and the spatial correlation of the detrended residuals is determined through studying the scales of fluctuation along eight directions. The principal directions of the surface trend are between 19° and 43°. The scales of fluctuation of the residuals are found between 5 km and 30 km. The spatial distribution parameters for the three large rainstorms are found to be similar to those for four ordinary rainfall events. The proposed rainfall spatial distribution model and parameters help define the impact area, rainfall intensity and local topographic effects for landslide hazard evaluation in the future. 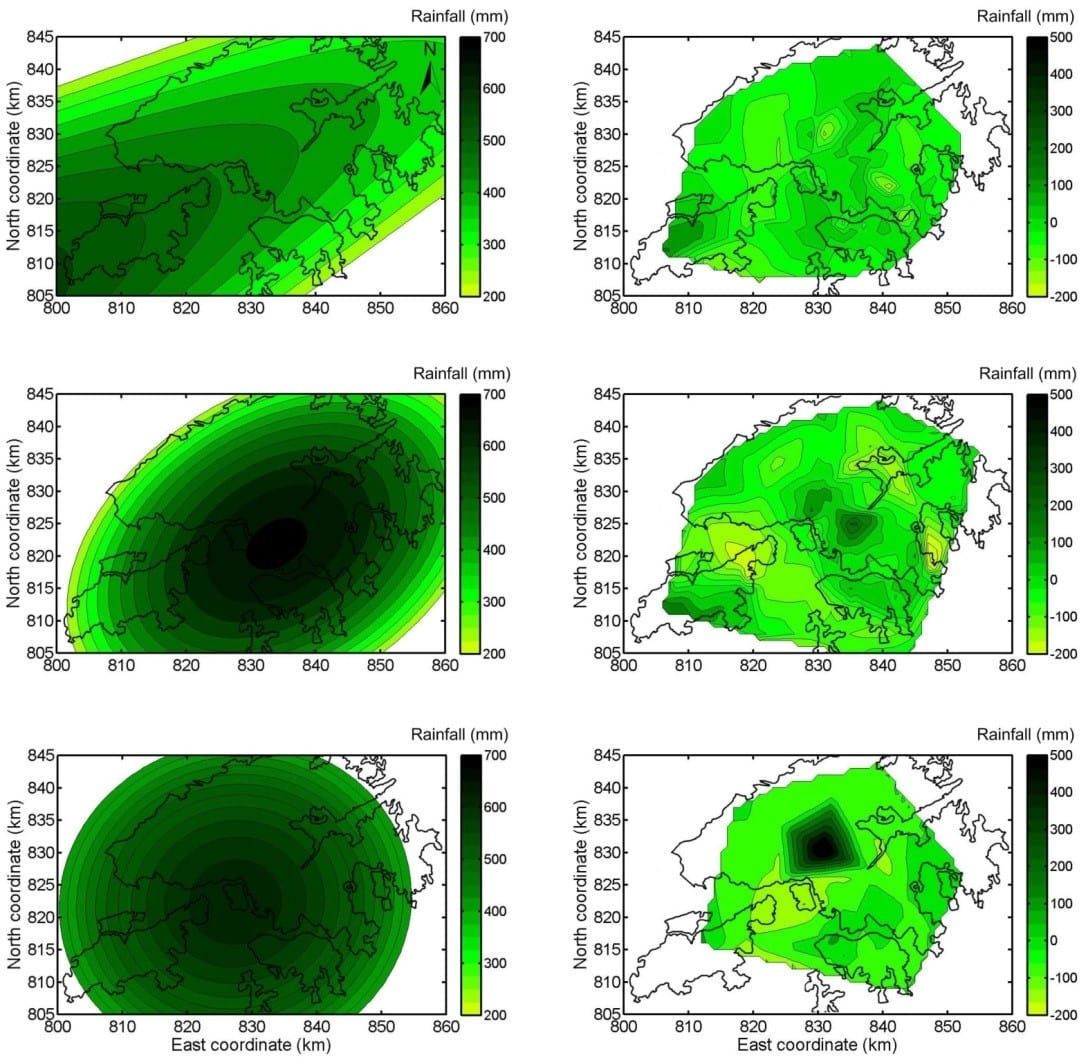 A numerical simulation platform has been built up, which can be used to predict the hazard processes of slope failures, flooding and debris flows under different storm scenarios, and potential hazard interactions among them. The rainfall-runoff processes associated with drainage networks can be simulated to detect the flooding-hazard-prone area simultaneously on this platform. This platform has been applied on Hong Kong Island. All the three types of hazards could occur in the same place. The maximum velocity of the whole watershed can be quite critical as a result of the steep slopes in the study area, especially around the mid-level mountains where the slope gradient varies dramatically. The drainage tunnel in the mid-mountain area contributes to alleviate the flood hazard, indicated by its large inflow and outflow rates and reduced medium and high-hazard-intensity areas. The detention tanks alleviate the local floods by draining a portion of excess stormwater. Although flooding control measures have been implemented to meet a major societal need for alleviating flooding problems, the densely urbanized area may still suffer flooding when severe events occur. New strategies are needed to cope with the urban flooding risk under the changing climate. The presence of densely populated buildings and the bed erosion enlarge the debris-flow intensity. The erosion volumes of multiple debris flows increase the flow volumes significantly. The changes of land use and land cover can also change the velocity of the debris flows.

The cascading effects of debris flows on flooding are therefore simulated. The erosion volumes of multiple debris flows increase the flow volumes significantly. The erosion and deposition processes can change the topography significantly, which in turn affects the flooding or other hazard processes. The inundated areas in the low-lying areas tend to increase if the channel morphology is changed by debris flows, though the flow depths in the mid-mountain areas are not significantly affected. The patterns, values and directions of the flow velocity are also changed. More buildings and streets are affected by larger and faster debris flows. The interactions among the debris flows and flooding should not be neglected, especially when severe rainstorms occur. The maximum flow depths in the downstream low-lying areas are enlarged if drainage inlets are blocked by debris flows. The areas next to the target catchment are also affected because more water is diverted into the neighbouring catchment. It is evident that multi-hazards and their interactions will significantly increase the slope risks. Their cascading effects are affected by the magnitudes of rainfall and other factors. Integrating the single hazards without considering their interactions tends to underestimate the impacts of these hazards.